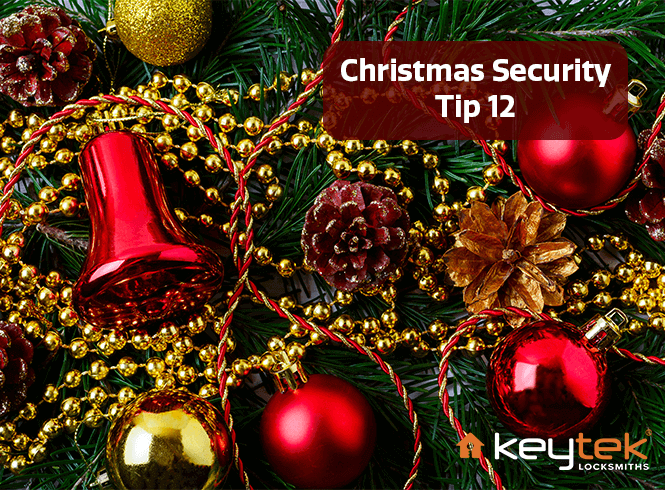 “Finally it’s always a good idea to have a locksmith come out do a security and insurance compliance check on your home, they will be more than happy to upgrade the locks on your home for your peace of mind over the Christmas period.”

To find out more about our locksmiths or to book an accredited locksmith to come to your home visit keytek.co.uk Happy Holidays from Keytek® Locksmiths! 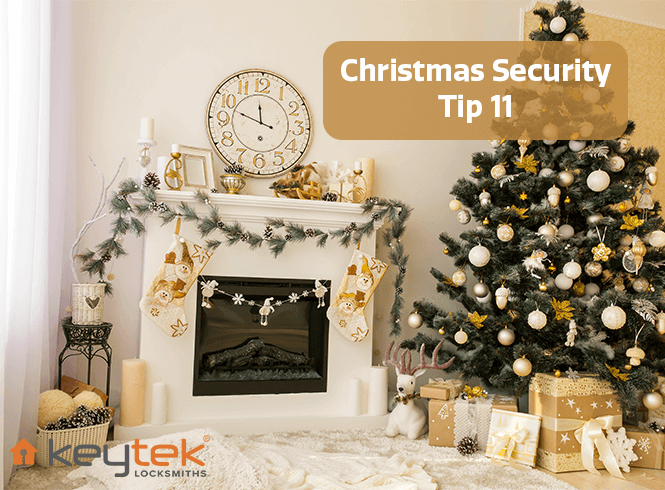 As part of Hertfordshire Constabulary’s ‘The Top Five Operation Guardian Tips’ they recommend securing your garden by shutting and locking any gates and making sure you lock away any garden tools as these can be used by burglars to break in.

In 2012 the Guardian even reported that thefts in garden furniture and accessories had soared as the value of what we buy for the garden has increased, a survey by Confused.com showed that the average value of a British garden’s contents was £825, this included garden tools, lawnmowers, patio furniture and barbecues. All of these items are easy pickings for an opportunistic burglar, so lock them away! For more security tips watch our complete security tips video below… 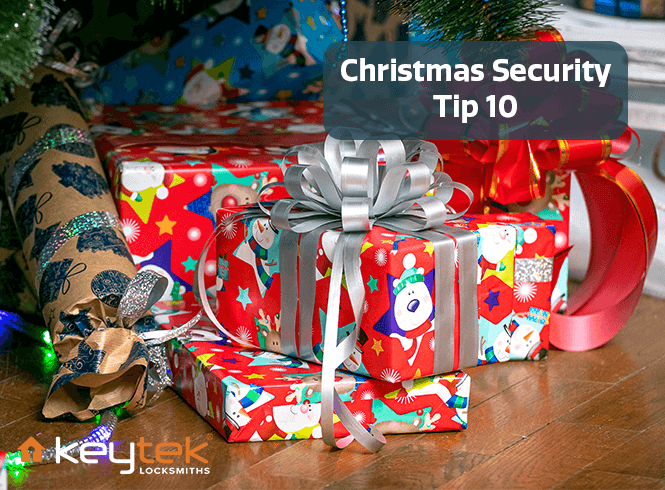 The tenth tip of our ‘The 12 Security Tips of Christmas’…

“Use a UV pen to mark any valuables so if the worse does happen it may help to make recovery easier.”

Many Police Forces and Home Insurance Providers will advise marking any valuables especially those that are more mobile i.e. a laptop or tablet.

Marking your valuables will usually deter thieves from stealing them as an item that is clearly marked will be more difficult for a thief to sell and will often reduce the items value (Devon and Cornwall police). It also helps to increase the chance of your property being identified if the worse did happen and it was either lost or stolen. 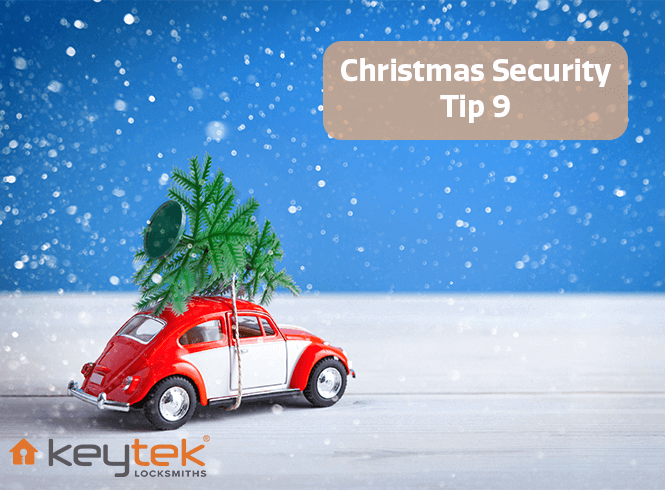 The ninth tip of our ‘The 12 Security Tips of Christmas’…

“Lights with sensors in the garden and front of your property will help to deter a burglar as they are more confident when working in the dark.”

As the nights draw darker, during the winter months it is really worth considering installing motion detector lights externally to your home.

Considering that the majority of burglaries take place during the night, 56% of recorded burglaries happen at night according to Tesco Compare, it is definitely a good idea to have security lights fitted to your property as these can help to deter a burglar from breaking into your home, as they are less likely to feel confident breaking into a property that is well-lit. The majority of Police Forces will advise this as an additional security measure, “consider fitting outside security lighting or a visible alarm to help deter burglars” (Thames Valley Police). Thames Valley Police also advise “using pea shingle or gravel on a driveway and spiky plants in garden beds”. 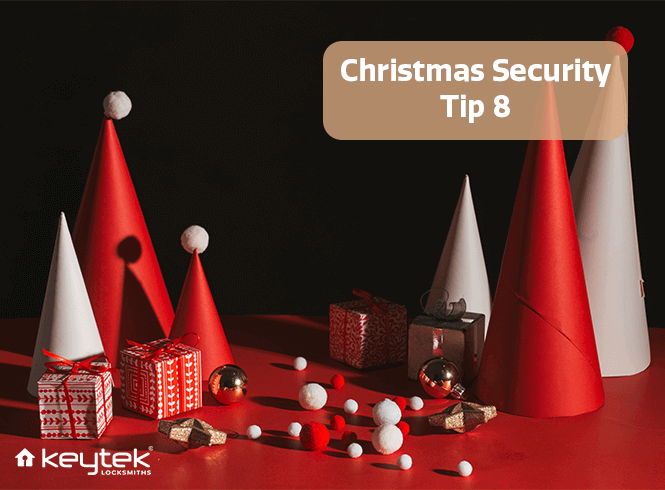 The eighth tip of our ‘The 12 Security Tips of Christmas’…

“Keep out any unwanted guests – it is always a good idea to have a spy hole or door chain fitted to your front door especially in the holiday season where you are more than likely to receive more visitors to your home.”

When evaluating the security of your home it is important to consider that you may need additional security such as a spy hole or door chain, which will not only improve the security of your home by allowing you to keep out unwanted guests but will also add to your peace of mind. The Metropolitan Police advises that a spy hole and door chain or even a limiter should be fitted for added safety and security as “these will enable you to deal with callers to your front door whilst retaining a level of security.” 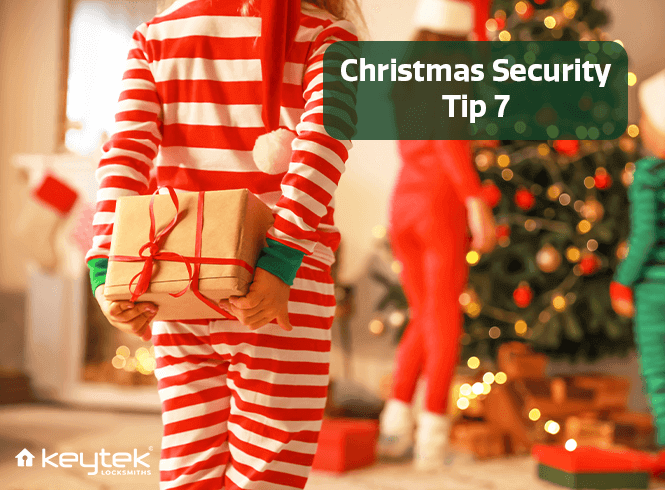 The seventh tip of our ‘The 12 Security Tips of Christmas’…

“Store all sets of keys away from the front door! Whatever time of year it is, it’s never a good idea to leave your keys anywhere near your front door. A letterbox cage/guard is also recommended as burglars will often use the letterbox to retrieve keys stored inside the house.”

When thinking about the security of your home, it is always a good idea to think like a burglar! Look for any potential security risks that may be used to the advantage of a burglar i.e. spare keys under the mat. In a recent survey by Keytek® it was found that over 20% of Britons were still leaving spare keys hidden in an unsecure location such as under a plant pot in the garden. Read more about the survey results in a previous blog post here https://blog.keytek.co.uk/2013/09/over-20-of-britons-are-still-leaving.html.

Many will advise against this including the charity Age UK who advise on their website not to leave spare keys in “obvious places such as under a flower pot or doormat or hanging inside the letterbox”. For a relatively small cost it is advisable to have a Key Safe fitted in a hidden location on the outside of your home by a 24 hour locksmith.  A Key Safe is a secure box where you can safely and securely store your keys without having to hide them or to rely on a neighbour or family member to look after them.

It is also advised that you don’t store any keys or ID documents near to a door or window that is accessible externally to minimise the risk of what is sometimes referred to as ‘fishing’. Insurance provider Aviva explains that “thieves will use props such as coat hangers and fishing rods to hook keys”. Key ‘fishing’ can be minimised not only by storing your keys away from any doors or windows but also by having a letterbox cage/guard fitted to your door by a locksmith. Letterbox brushes can be fitted to avoid a burglar seeing where your keys are stored. 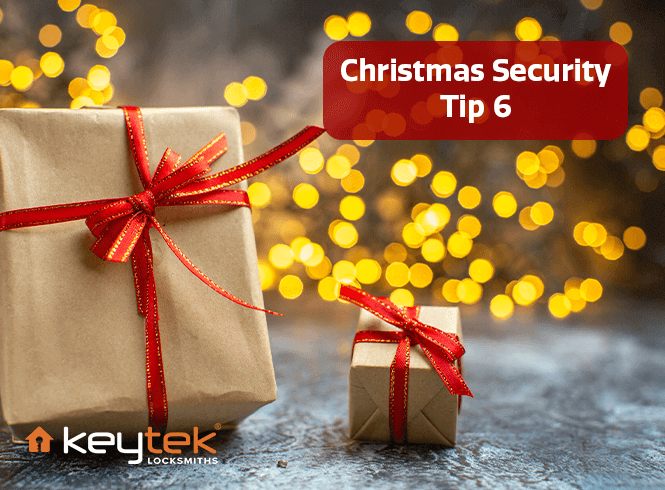 “Don’t discuss any holiday plans on any type of open forum i.e. Facebook. I’m sure you have all heard the horror stories where over a thousand people turned up to a party that had been made public on Facebook, it would be like that but a party for… burglars!”

According to online etiquette blog ‘Netmanners’ social network sites such as Facebook and Twitter are accessible by anyone although you are letting your ‘friends’ know what you are up to there is always the underlying issue that anyone can access your information and find out what you are up to i.e. burglars.
The rise of social media used for criminal purposes has become more evident in recent years especially when you look at cases such as the Hollywood burglaries that occurred from 2008 – 2009 by members of a burglary group known in the media as ‘The Bling Ring’. The activities of this group of seven teenage burglars led to the theft of over $3 million in cash and belongings stolen from the homes of well known celebrities, the majority of which was stolen from Paris Hilton on several occasions (Wikipedia). According to reports and the movie adaptation ‘The Bling Ring’ the teenagers used social media to find out the best opportunity to target each celebrity, one scene in the movie even shows one of the teens using Google street view to find a to break into Paris Hilton’s home.

Paris Hilton herself has partially blamed the burglaries on the rise of social media…
In an interview with Piers Morgan the heiress said, “This could not have happened five, 10 years ago”. She continued: “There wasn’t a Twitter or Facebook or any of these things, so nowadays people know exactly where you are.” (Wetpaint) Since the burglaries the celebrity heiress.