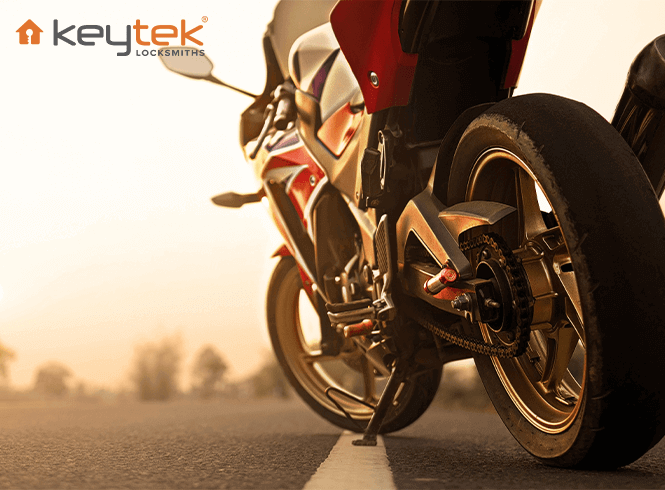 Every year thousands of cars are stolen across the UK, with a staggering 69,547 car thefts recorded in 2015. There are many reasons that this figure is so high, and just two of the reasons can be; inadequate car security or the driver has left their car in a vulnerable way, making it a target for a thief.

One of the most important factors when it comes to car security is to ensure you keep your car or other motor vehicle safe and secure. To help make sure your vehicle does not become a target of a criminal, read our tips on how not only to keep your car safe, but how to make sure you don’t lock yourself out of it.

Using a disc lock reminder is a great way of making sure you don’t leave your motor bike or peddle bike without locking it. You simply attach the lock reminder to your key ring, when not in use, reminding you to lock your bike when you leave it unattended.

Data tagging is the application of an electronic tag to your motorcycle which is then stored on a database that the police have access to via scanners. If your bike was unfortunately stolen and you have reported the theft to data tag (this can be done via their website) and the bike is then stopped and scanned by a police officer, the bike will flag up on the scanner as stolen. This will alert the police officer or whoever is scanning the motorcycle at this point that the bike has been stolen and the bike and thief can then be detained by the police and your prized possession returned to you.

Most vehicles will have a dead lock locking system, so ensure that when locking your car the locking button is pressed twice on your key fob, this ensures that all doors to the car are securely locked and not left vulnerable to a break in, it will also ensure that the alarm is set – a top tip for your car security!

‘Marking’ your car will mean it can be easily identified if stolen. There are a few ways to do this. A simple way to do this is using an ‘invisible’ ultraviolet pen to write on various parts of your car. A more complicated involves covering your car with thousands of micro dots, each containing a code with your identifiable details. Marking your car will not stop it from being stolen, but it will up the chance of finding it, if it has been stolen.

Take your valuables with you

Try not to leave anything of value in your car. If your purse is left on the front seat for everyone to see, a potential thief will be more tempted to break into your car. Hide other things as well, such as CD’s, laptops, jacket or even sunglasses. Some thieves won’t want to actually take your car, just make off with some valuables.

This one might sound like a no brainer; car alarms do more than wake up the neighbours when they go off in the middle of the night. The fact that if someone attempts to break into your car, they will set off a extremely loud noise and flashing lights, means they are more likely to abandon the attempt and run away. Most modern cars come with an alarm as standard, but if you have an older car, it’s worth getting one professionally fitted.

During the winter, freezing cold temperatures mean that cars tend to freeze and frost up which can unfortunately take time to clear. If you do decide to start your car early to clear your windscreen, try not to leave your vehicle unattended or out of site as a thief can easily make off with your car.

Parking in an unknown Town or City

If you visit a town or city, are unsure of the area or are concerned about the safety of your vehicle and car security always park in well-lit up areas and secure car parks. Banks are a great place to park outside at night as they are well lit up and covered in security cameras.

A few years ago, the idea of driverless cars was only present in films set in the future. However now they are actually being tested on our streets. Uber and Google are both trailing driverless cars at the moment, so it won’t be long until they are common place. That means car safety is going to change as human error should be eliminated.

There is a huge amount of technology making these driverless cars safe; sensors being the main one. Some of the sensors used on driverless cars include cameras, radar, lasers and ultrasonic sensors. GPS and mapping technology are also used to help the car determine its position. Essentially it works like a human driver would. You use your eyes, ears and sometimes touch to drive safely, these human ‘sensors’ feed information to your brain and means you will press the brake if needed. It’s the same with a driverless car; the cameras and sensor detect what’s around them and press the brake or the accelerator accordingly.

Make sure you’ve always got your keys!

Never leave your keys in your car! When you exit make sure to put them in your pocket, bag or purse. Or at least have them in your hand, this way you will never put them down on the seat or in the boot and forget about them. Using a bright or jazzy keyring means your keys will stand out more, so you don’t forget them.

Always make sure you remove your keys from the ignition when you exit your car, some modern cars will automatically lock themselves after a set amount of time once the doors are shut. So if you’re in a rush and happen to leave the keys in the ignition to pop back in the house for example, you may return to a horrible surprise when you find it won’t open!

Replace the batteries in the fob

With some modern cars the key does not have a manual option. So you could get locked out if your key runs out of battery. It’s a simple fix of getting a battery from Halfords or another car store.

Always have a locksmiths number on hand

Your final option is to have the number for an locksmith on hand, ideally programed into your phone. That way if you do lock yourself out of the car, you have access to someone who can help you, no matter where you are. Using a locksmith is a one off payment, so it saves you paying a yearly fee of an auto club that could come and help you.

How to help prevent your car being stolen

Locked out of your car?