The Ultimate Guide to Living and Working in Edinburgh

Here is everything you need to know about Edinburgh, use the list below to jump between the relevant sections!

Edinburgh is the capital of Scotland and is located in the central Eastern part of the country along the Firth of Forth which leads out into the North Sea. Edinburgh is considered one of the most beautiful cities in Europe due to its rich heritage and natural landscaping. There is evidence that Edinburgh dates back as early as 8500 BC!

It takes around 7 hours to reach Edinburgh from London by car but only around 5 hours by train or just over an hour by plane! 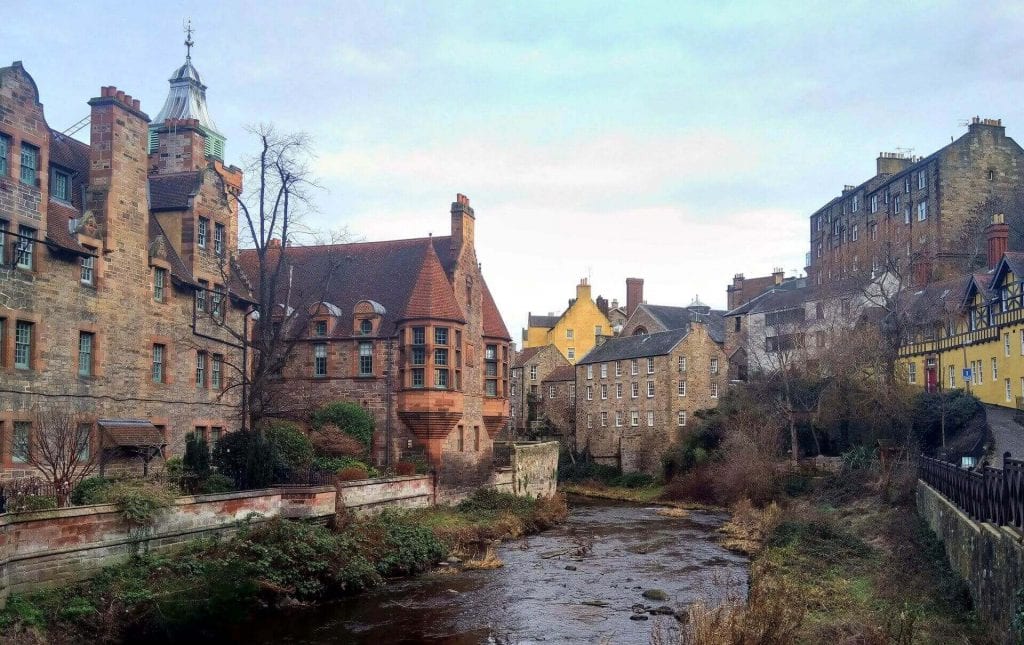 There were 216 sales of detached houses over the past year according to Zoopla, the average price paid stands at £565,620 with the current average value (July 2020) much lower at £536,096. This has resulted in a value change of -5.64%, this decrease may be due to the current issues of the UK leaving the European Union and as an affect of Covid-19.

There were oodles of flat sales in Edinburgh over the last 12 months, 3,226 in total! The average price paid was £228,128 and the current average value stands at £217,045. As the trend follows for the rest of the property prices in Edinburgh the value change has dropped significantly by -7.46%.

Is Edinburgh a Nice Place to Live?

The Times reported that Edinburgh is the best place to live in Scotland in 2020! The city is packed full of beautiful architecture and history. The castle sits proudly upon the hill looking over the Gothic and Georgian architecture in the city, the meadows and the far reaching sea views.

Edinburgh was also the first city in the world to attain the prestigious UNESCO City of Literature title in 2004. Many famous writers and poets were born here including the famous JK Rowling who imagined up the fantasy world of Harry Potter and if you’ve read any of the books or seen any of the films you can tell her birthplace was truly an inspiration! The city continues to inspire many more minds as it is home to two top universities!

Insider reports that Edinburgh ranked 11th out of the worlds happiest cities, that’s some feat! But surely there must be a catch with everything that Edinburgh has to offer? Indeed, although Edinburgh’s employment rate and average wage remain high, Edinburgh is a very expensive place to live in comparison to the rest of Scotland!

Is Edinburgh a Safe Place to Live?

In 2018 it was reported in the Edinburgh Evening News that Edinburgh is the safest city in the UK. The article states that 90% of the people in the capital feel safe and only 16% of people within the city reported that they have experienced crime.

What are the Best Neighbourhoods in Edinburgh

Some of the best neighbourhoods to live in, in Edinburgh are:

Leith, Edinburgh is an upcoming district and named one of the world’s coolest neighbourhoods on the Visit Scotland blog. The area is set around the historic dockyard and boasts many attractive restaurants and cafes as well as a yearly Leith festival, theatre, yachts and workshops. Property prices here start from around £120,000 for a 1 bed flat to £600,000 4 bed houses. (July 2020).

Stockbridge, Edinburgh is one of the pricier places to live in Edinburgh as it resides along the Water of Leith and is close to many of Edinburgh’s green spaces including the Royal Botanic Garden Edinburgh. You’ll also find many of Edinburgh’s galleries and cosy eateries here. Property prices start from £189,995 for a 1 bed flat all the way to £1,350,000 for a 7 bed apartment in a listed Georgian townhouse.

You sure are going to want a window seat if buying a property in Edinburgh’s Old Town which dates back to the medieval times. The quaint, cobbled streets entangle themselves around each other and are abundant in history and magnificent architecture as they lead up and down from Edinburgh castle and the Palace of Holyroodhouse. Every August the Old Town lights up the city with sights and sounds of the Edinburgh Fringe and Festival. Prices start from £165,000 to £775,000 (July 2020).

Travelling around Edinburgh is best explored by foot but if the hilly terrain is too much there are plenty of other options.

There are plenty of buses to get you in and around Edinburgh, the routes are served by Lothian buses. You can see the route map and prices here so you can plan your journey in advance.

The tram runs from Edinburgh Airport to the east end of the city centre at York Place. You can buy your tickets from vending machines on the tram platforms or by downloading the Transport for Edinburgh mobile app.

Edinburgh Waverley serves as the principal station in Edinburgh and is the second busiest station in Scotland after Glasgow Central. The train station is located in the heart of the hustle and bustle of the city with many of Edinburgh’s top attractions a short walk away. It takes around 50 minutes to get to Glasgow and around 5 hours from London via train!

Fancy exploring Edinburgh at a gentle pace and enjoy bobbing along the sea? Why not take a sightseeing cruise? We’ve found this one here with prices starting from £20 that include cream tea!

Where is the Closest Airport to Edinburgh?

Edinburgh Airport is located in the Islington area of the city, with flights to over 150 destinations worldwide!

Where is Edinburgh’s Closest Hospital?

There are three main NHS hospitals in Edinburgh; they are Royal Infirmary of Edinburgh, Royal Edinburgh Hospital and Western General Hospital. 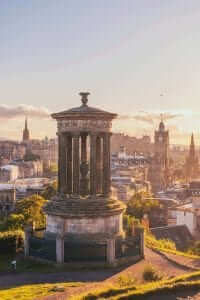 The schools in Edinburgh are some of the best in Scotland along with one of the best universities in the whole of the UK. The schools are governed by Her Majesty’s Inspectorate of Education (HMIe) who inspect the quality of public and independent schools, including primary, secondary and further education colleges. To find out the inspection report of the schools in your chosen area simply search for the name of the school on this website and click through to see the report.

Heriot-Watt University has an impressive five campuses around the world including Malaysia and Dubai! It specialises in areas of science, engineering, design, business and languages. Find out more on their website here.

Offering courses from design, sustainable construction and cyber-security Edinburgh Napier University has something for all of their 20,000 students across their multi-campus who voted them #1 in Edinburgh in the student satisfaction surveys. Discover more here!

Offering vocational courses in healthcare social sciences, drama and creative courses the university specialises in research that enhance others lives. The university is the smallest in the city region so class sizes are smaller and benefit from closer contact between students and staff. Have a look yourself here.

Agriculture, biological and animal sciences, sustainable land use and environmental protection are the genre of courses on offer at this university. The university has six campuses across Scotland, find out more about them here.

Eating and Drinking in Edinburgh

These are the top three restaurants in Edinburgh according to TripAdvisor are as follows:

Claiming the top spot out of 1,706 restaurants in Edinburgh, this family-run restaurant boasts an elegant and relaxed meeting place; the perfect spot to enjoy Italian based light bites accompanied by delicious wine!

Number two on the list is this contemporary Scottish restaurant. The menu moves with the seasons and offers a surprise tasting menu in their intimate dining room. The dishes follow the contemporary interior design with beautifully decorated plates.

Top 3 Pubs and Bars in Edinburgh

The following include the top three pubs in Edinburgh according to TripAdvisor:

Experience the taste of Sicily at this Italian bar in Edinburgh. The wines are sourced from the owners very own family-run vineyard in Sicily and offer tempting Italian food.

Located on the bridge in the heart of the old town this traditional Scottish public house is bursting with charm and character. It offers a wide range of craft ales, whiskies and good quality pub grub!

Born from the love of adventure is Brewhemia. Boasting fresh beer, artisan coffee, fresh Scottish scran, cocktails and fine wine! Don’t forget to put on your glad rags here as the dress code is as dapper as the interior.

You’ll be in your element if shopping is your favourite past time as Edinburgh has plenty of shopping options to choose from, the main shopping areas are as follows:

George Street runs parallel to Princes Street and includes designer shops and hotels as well as historical buildings including the famous Assembly Rooms.

If luxury stores are your thing head to Multrees Walk where you will find brands such as Louis Vuitton, Stella McCartney and Michael Kors.

Take a pretty stroll down the cobbled streets of the West End. Here you will find upmarket boutiques, flower shops and organic food retailers as well as a few coffee shops.

There is a mix of jewellers, galleries and second hand shops as well as the weekly Stockbridge Market which sets up every Sunday offering fresh produce and artisan bakes!

There are many more shopping streets and shopping centres to explore in Edinburgh take a look through Edinburgh.org to find out more… 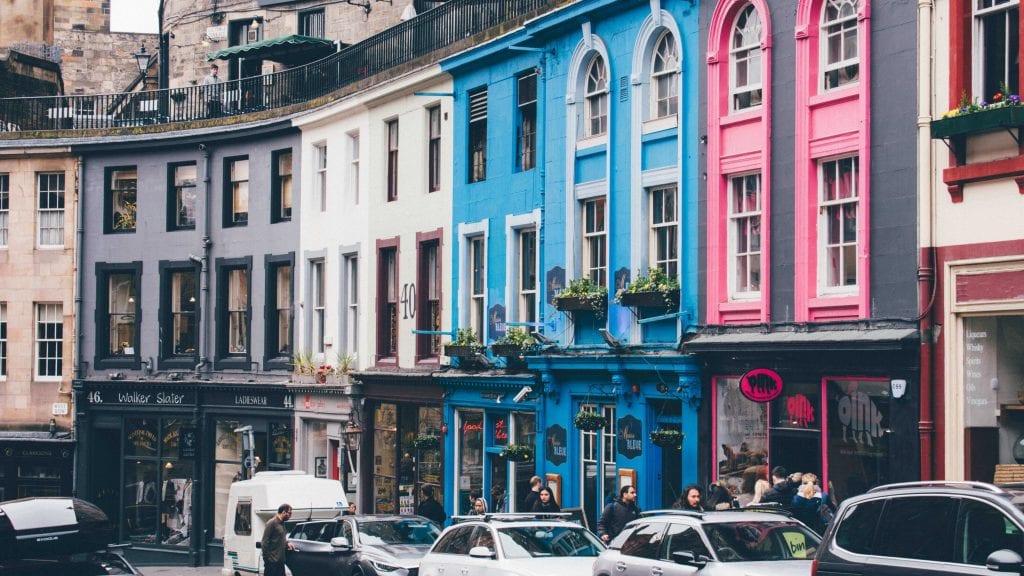 The top three hotels according to TripAdvisor are:

Picking the post to the top spot is Fingal, a ship located in the historic Port of Leith. The ship is the former Northern Lighthouse Board ship which went under a £5 million development to offer 23 luxury cabins inspired by its rich maritime heritage and Stevenson Lighthouses.

This elegant Georgian home was built in 1832 and has been transformed into a boutique hotel with 10 rooms, a restaurant, bar, library and outdoor terraces. You’ll sleep well here in Egyptian cotton sheets, fluffy towels and soft dressing gowns.

5 Georgian buildings make up this hotel that offer stylish suites a stone throw away from Princes Street. Your suite offers a home away from home feel with plenty of DVDs to watch on the flat screen TV and a fully equipped kitchen to cook up a storm!

Top 10 Things to do in Edinburgh

Need a Locksmith in Edinburgh?

View our Keytek® Locksmiths Edinburgh page to find your local Locksmith today or call us on 0131 297 2081!