The Ultimate Guide to Living and Working in Winchester

In this guide, we’ll go over everything about what it’s like to live in Winchester, UK. From discussing the best neighbourhoods, best schools and university guide to shopping guide and why Winchester is a nice place to live!

Winchester is located on the edge of the South Downs National Park in the county of Hampshire. The picturesque city is known for its historical buildings including the medieval Winchester Cathedral, one of the largest in the whole of Europe. Avid readers of Jane Austen’s novels may be interested to know that the famous writer herself is buried within the grounds of Winchester Cathedral.

It will take you around 1hr 30 minutes to reach Winchester from London via car and just over an hour on a direct train!

From the data collected in the 2011 census it shows that there were 116,600 residents in Winchester, an increase of almost 10,000 people from the census a decade earlier. The population of Winchester is now believed to be around 122,000 residents or 480 inhabitants per square mile.

The average amount paid by Winchester homeowners currently stand at £571,749. This information was gathered by Zoopla from the 434 sales that took place over the past 12 months. However, the value of these properties are on the decline by -6.47% as Zoopla estimates the current average value of a property in Winchester to be £541,838 in October 2020.

Zoopla again estimates the current average value to be worth lower than the average price paid with a value change of -9.26%. The average amount paid was £492,147 from the 109 sales that took place over the last year but with the downfall Zoopla reckons they are now worth £475,908.

With 120 sales taking place in Winchester over the past 12 months the average amount paid for a terraced house is £481,132. This is again more than the current Zoopla average value estimate which stands at £461,747 resulting in a decrease in value change of -9.69%.

You can expect to pay around £273,612 for a flat in Winchester as that is the average amount paid by flat owners in the past 12 months. There has seen a value change of -9.36% following the trend of other property values in Winchester but Zoopla estimates the flats to be worth more at £303,006.

The average amount you can expect to pay to rent a property in Winchester will be around £1,355 according to home.co.uk. This number is of course affected by whether you choose to rent a room, which will set you back £542pcm, a flat for £1,228pcm or a house for £1,758pcm!

Is Winchester a Nice Place to Live?

In a study formed this year by raisin.co.uk Winchester came out on top as the happiest city in the UK! This data is formed from the happiness rankings of their participants combined with the average life expectancy of a Winchester resident of 83.6 years, issuing the city with a happiness index rating of 104. But does this come at a price? Well the title of the article on Raisin is ‘Does money buy happiness?…’ the purpose for their study was to find whether there was a correlation between happiness and wealth. Their findings found that the happiest of people in cities across the UK earned on average £33,864 and were much happier overall than those who earned under £30k. The average salary of a Winchester worker is higher than that at £35,346!

As well as potentially earning around £35k by working in Winchester you can almost guarantee that Winchester will consistently feature in the top 10 lists of best cities to live in the UK due to the pretty lined streets, historical elements and nature walks along the South Downs.

Is Winchester a Safe Place to Live?

There is generally a low crime rate across Winchester, with 400-600 crimes taking place every few months. Violent crime and ASB were the most reported number of crimes during the month of August 2020 whereas burglary and theft came in at 49 cases and 1 case respectively.

Where are the Best Neighbourhoods in Winchester?

Winchester is a lovely place to live, some may say to avoid the areas of Winnal and Stanmore, but like everywhere every road can be different and home is what you make it. Here are some of our top neighbourhoods to live in below:

St. Cross is one of the most affiliated areas in Winchester with its pretty range of houses, it is not unusual to see a typical Tudor style house sat next to a sleek contemporary. If you like walking then this area resides next to the peaceful water meadows and it is quite a scenic walk into town. There are Ofsted ‘Outstanding’ schools in this area including St. Faiths Church of England Primary School. As well as that there are also some highly rated local pubs in St. Cross including The Bell Inn, Wykeham Arms and the Green Man.

A pretty area lined with spacious terraced properties but not too overcrowded. Fulflood is close to the railway station so is a good location to buy or rent for commuters. There is a nice park to go for a picnic or to take the dog for a walk at Oram’s Arbour and for a night of entertainment head down to your local theatre ‘The Railway Inn’ to watch a play or comedy show! The Westgate School is within 10 minutes walking distance even from the furthest homes in Fulflood and take children from early years all the way up until they finish their GCSE’s!

Kings Worthy is a little village that mostly consists of semi-detached homes followed by detached although there are a small number of terraced houses and flats. If you enjoy spending time within the community join Worthies Sports and Social Club. It houses a small bar and events such as charity fundraisers and children’s entertainment as well as showing sports on TV, if you’re a sports person yourself there is a nice big field out the back to have a little run around! There are also a few schools around Kings Worthy Primary School is Ofsted rated ‘Good’ and Prince’s Mead Independent School is right around the corner also. 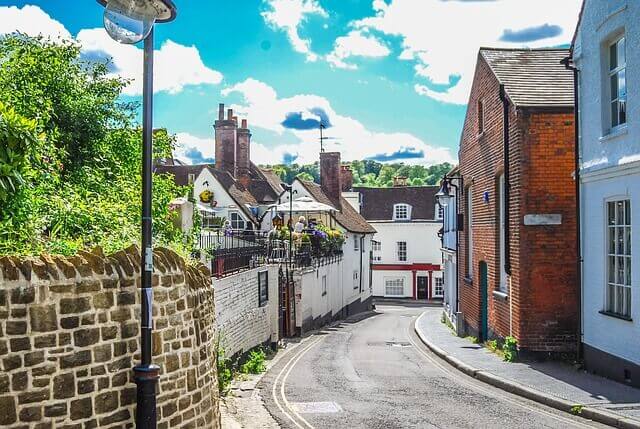 As Winchester is only an hour or so away from London, getting there is relatively easy!

Winchester is accessible via the M3 by taking either junctions 9, 10 or 11! If you’re coming from the north of Winchester you’ll need to take the A34.

Winchester Railway Station has a direct train to Waterloo taking just an hour, as well as direct trains into the very South and North of England including Southampton and Birmingham.

National Express will take you into Winchester from London and Oxford as well as many other locations.

Southampton Airport is a quick 15 minute drive or train ride away. Alternatively, for further destinations London Heathrow and London Gatwick are 50 and 72 miles away.

Royal Hampshire County Hospital is located along Romsey Road close to the centre of the city.

There are 45 schools and colleges in Winchester, the majority of which perform really well. Ofsted rates 12 of these schools and colleges to be ‘Outstanding’, one which is rated ‘Requires Improvement’ with the remaining schools rated to be ‘Good’ or unrated as they are an independent school.

There are two universities in Winchester, the University of Winchester and Winchester School of Art.

The University of Winchester

Eating and Drinking in Winchester

These are the top three restaurants in Winchester according to Tripadvisor:

Nestled in the countryside next to a duck pond and thatched cottages, The Fox is a great scenic spot! It prides itself on only using local, Hampshire produce that is bought directly from the farmer.

Winning a Michelin Award in 2020 this Japanese restaurant promises to introduce you to authentic Japanese cuisine! The sushi is prepared to an exceptionally high standard and presented beautifully on the plate!

An 18th century coaching inn sources it food from local organic produce and a daily changing menu so you can ensure you’re eating the best of foods and can dine how many times you fancy and never get bored! It also trains to be chefs in the British/ French cuisine!

Some of the top pubs rated by winchesterbloggers.com are as follows:

Overlooking the river from the courtyard garden is the best place to be on a summer’s day but fear not if you are visiting in the cooler months the wood fire make this pub the best place to be! It offers a good selection of beers and ales and some tasty pub food!

Born in 1755 this pub has withstood many a catastrophe and still manages to be a favourite spot with the locals. The pub is decorated to match its history offering a warm, interesting setting.

The decoration has a fine mix of contemporary elegance and eccentricity. Offering cocktails to beers to delicious food. Although the kitchen is currently closed due to a refurbishment, we can’t wait to taste some great food here after!

These are the top three hotels in Winchester according to Tripadvisor:

A romantic hotel with all the amenities including free breakfast! The rooms have a classic feel looking out onto the pretty garden. Don’t forget to also admire the numerous stain glass windows here!

Historical charm and contemporary elegance are found through the gates up to Lainston house. The 17th century hotel is set in 63 acres of land so you’ll have plenty of space to get some fresh air. This hotel offers more than most with an on-site cookery school and falconry!

A sweeping staircase as you enter the door will have you feeling as though you have stepped into luxury here. Located in the heart of the city, the Winchester Royal Hotel is described as a hidden gem! The bedrooms are modern and calming, offering you a peaceful night’s sleep!

Top 10 Things to Do in Winchester

Need a Locksmith in Winchester?

There are many other things you need to consider when moving home so check out our Moving Home Checklist to help you along the way! Once you’re in consider improving the security of your home further still by checking out our Ultimate Guide to Home Security here!

View our Keytek® Locksmiths Winchester page to find your local Locksmith today or call us on 01962 677099!