The Ultimate Guide to Living and Working in Portsmouth

Here is everything you need to know about Portsmouth, use the list below to jump between the relevant sections!

Portsmouth is a waterfront city with copious amounts of maritime heritage located on the south coast of England, opposite the Isle of Wight. It is just under two hours to reach London by car or train. It is also the only city situated on an island (Portsea Island) in England.

Founded in the Middle Ages in 1180 by John of Gisors and is famous for many things including Charles Dickens birthplace, one of Henry VIII’s famous fortifications – Southsea Castle and the historic dockyard which homes Lord Nelson’s flagship HMS Victory among others. 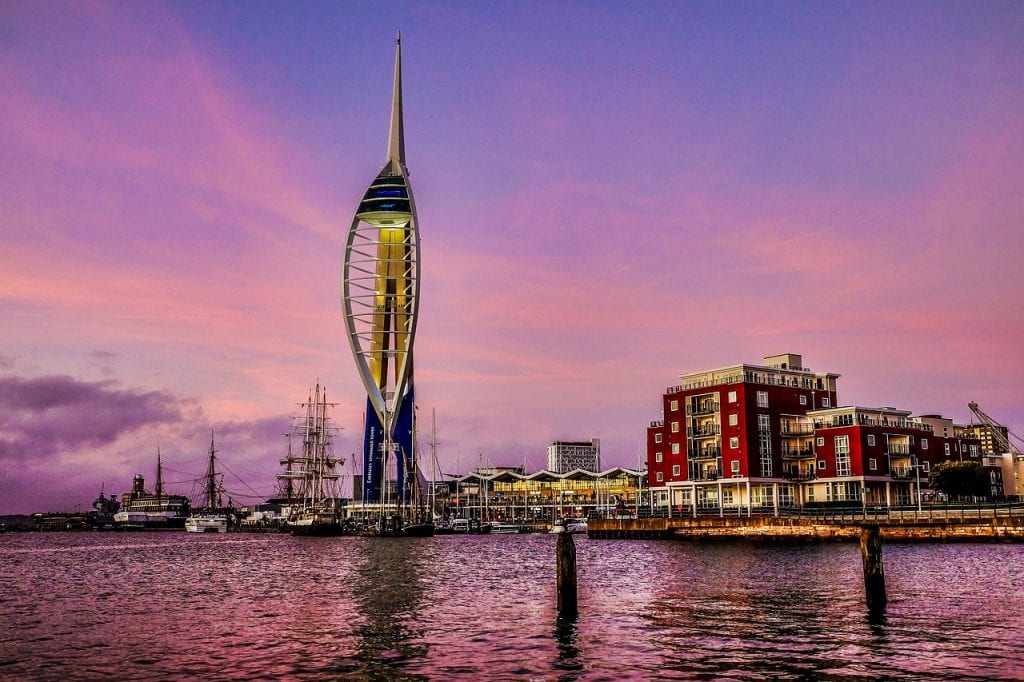 In 2020, it was recorded that Portsmouth had a population of 238,137 people. The census reflected a 10% growth from 2001. Its population in 2021 therefore estimated to be 249,956. As a result of the increases in Portsmouth’s population throughout the years and key differences in demographics, the city’s population is expected to see constant growth.

The average house cost in Portsmouth stands at £251,323 in 2021, which has fallen 0.5% compared to the past year. The following table shows average cost to buy a property in Portsmouth, along with the value change throughout 2021.

In 2021, the average rent cost in Portsmouth stood at £1,363 per calendar month (PCM). The following table shows how much it costs to rent in Portsmouth by property type.

The following table shows how much it costs to rent in Portsmouth by number of bedrooms:

Is Portsmouth a Nice Place to Live?

Portsmouth is a vibrant city with plenty to do as it boasts a Victorian promenade, a designer outlet shopping centre and of course the historic dockyard and naval town.

According to the Office of National Statistics (ONS) Portsmouth residents rated their happiness levels higher than the national average, resulting in a score of 7.6 out of 10! The results for life satisfaction scored a smidge higher at 7.7 out of 10 and anxiety levels at a low score of 2.8 out of 10!

It must be mentioned that as an island there isn’t much room for growth within Portsmouth so there are multiple tower blocks of flats and not much green space per person, resulting in Portsmouth being the most densely populated city outside London.

Is Portsmouth a Safe Place to Live?

As you’ll find anywhere there are good and bad neighbourhoods within Portsmouth. Crime levels are higher in the city compared to the rest of the South East with violent crime and anti-social behaviour taking the top spots for most amount of crime reported so it is important you do your research in which area’s to avoid if you are thinking of moving here. The higher crime rates may be linked due to the historic naval elements as famous gangs formed years back and the city’s passion for their football club Pompey F.C. whom rival neighbouring Saints, Southampton F.C.

The areas with the worst reputation which may influence your move are Somerstown, Buckland and Paulsgrove.

What are the Best Neighbourhoods in Portsmouth?

There are a few more neighbourhoods in Portsmouth with good reputations but here are three we recommend below:

Baffins and neighbouring Milton is a great place to bring up a family in Portsmouth. Surrounded by good schools and lots of areas of greenery and Milton Lake, of which Hayling Island sits opposite. Property prices range from just under £100,000 to £400,000 (July 2020).

North of Baffins lies Copnor so this district also benefits from greenery of Great Salterns and the Lake across from Hayling Island. It is also one of the three villages on Portsea Island that was listed on the Doomesday book! Property prices range from £82,000 to £465,000 (July 2020).

Located in the North of Portsmouth and across the bridge from Portsea Island lie Drayton and Farlington. The area benefits from more space compared to the packed city on the island and enjoys views across the lake and the harbour from Farlington Marshes Nature Reserve. Prices range from £130,000 to over a million!

There are plenty of options to travel in and around Portsmouth. Take a look at your options below:

If you are visiting Portsmouth for the day your best mode of transport is the park and ride. Opened in 2014 the state of the art facility is located on the M275 entrance to the city and the service runs every 12 minutes during peak times.

The buses are a hop on hop off service with stops at all the major attractions so you can travel the city at ease and without the worry of getting stuck in traffic.

Travelling to the centre of London from Portsmouth takes around two hours and around an hour to reach the outskirts via car and train.

Is there a Train Station in Portsmouth

You can get a train directly to multiple main London stops from the Portsmouth stations which takes around a couple of hours.

There are two major bus companies that run in and around Portsmouth other than the park and ride. They are First Bus and Stagecoach, you can use the My Journey website to find out the routes you need to take whilst travelling.

As well as the local buses you can also catch coaches from the main stations that run across the whole of the UK, National Express and Megabus are the ones that operate in the city.

As an island city there are plenty of options of travel by sea in Portsmouth. From Portsmouth International Port you can reach the ports in the north of France and the Channel Islands. From smaller ports across the island you can also reach Gosport, Hayling Island and the Isle of Wight via ferries and hovercrafts.

Where is the Closest Airport to Portsmouth?

Where is Portsmouth’s Closest Hospital?

Queen Alexandra (QA) Hospital is Portsmouth’s main hospital. It is located on the hill above Portsmouth and is in easy access of the M37 and A3M. Portsmouth is also home to St. Mary’s hospital but is smaller than QA.

As for secondary schools, St Edmund’s Catholic School is one of the most popular in the city with an Ofsted rating of “outstanding”. There are many other independent and special schools you can choose from.

The University of Portsmouth first opened its doors in 1908 and over the years has developed into the institution it is today. The University ‘excels in research areas from cosmology and astrophysics to cyber security, forensics and sport science.’

The University of Portsmouth achieved number 24 out of 121 universities in the UK in the Guardian University Guide, 2021. It achieved 84% course quality satisfaction amongst their students in the “Post Graduate Taught Experience Survey” in 2021.

Living and Studying in Portsmouth

There are plenty of options to choose from when picking your accommodation whilst studying at the University of Portsmouth. There are 14 different halls of residence all conveniently located close to the lecture halls. All of the rooms are singles and are rented to you for the entire year so very private. Each room comes with a bed, desk and drawers, broadband is included in the cost and the majority of the rooms are en-suite.

Eating and Drinking in Portsmouth

These are the top three restaurants in Portsmouth:

Popular for its vegan and vegetarian options on the menu, Huis is also known for their extensive Belgian cruise main dishes which served alongside one of the finest Belgium beers. The restaurant’s decorations are very homey, offering a relaxing atmosphere to its customers after an exhausting work day.

Minnie’s Kitchen is a charming family-owned restaurant in Portsmouth and Southsea that offers warm, attentive service, delectable, beautifully presented food, and amazing wine! Allow yourself to be pampered with a fun and classy meal. They also have lots of tables in the chic upstairs dining area.

If you are looking for a tasty but healthy meal, The Rocka Restaurant should be your top choice. They offer lots of different cuisine choices, including seafood, Mediterranean, and European. Their authentic hospitality and lively atmosphere is what they are highly reviewed for.

These are the top three pubs in Portsmouth:

This pub serves fresh food all day, from an appetizing breakfast menu to seafood platters and mouth-watering evening dishes. On the bar, there’s an extensive wine list menu offering exceptional and special bottles from all over the world. Private events can also be hosted in the pub, to date they have seen a range of corporate events, celebrations, meetings, and even weddings taking place!

With a clear view of Portsmouth’s famous Gunwharf and the yachts, the Spice Island offers you the best combination of views and delicious food and best drinks. Venues are also available for hiring, including wedding venues.

There is lots of shopping to be done in Portsmouth, from designer outlets, shopping centres and independent shops there is something for everyone.

Gunwharf quays is a designer outlet shopping centre located on the west side of the island. As well as the shops you will find Vue cinema, Hollywood Bowl, Aspex art gallery, a casino and boat tours as well as lots of eateries so you are guaranteed a fun day out!

There are a couple of independent and sport shops found at Port Solent as well as a cinema, health club and plenty of restaurants. Although very specific for shopping, it is worth a visit to Port Solent to walk around the boardwalk and admire the yachts parked in the bay.

In Portsmouth’s city centre you will find a variety of high street chain stores, a couple of independent shops and cafe’s including Cascades shopping centre. There is also a market in the middle of the centre most days.

Similar to Portsmouth’s town centre is Southsea high street where you will find similar types of shops and cafes.

Recently redeveloped the Hotwalls Studios consist of thirteen artist studios where they create and sell as well as a waterfront cafe the Canteen. This is a lovely spot to browse local art and grab and ice-cream as you continue your walk through Portsmouth’s historic old town.

These are the top three hotels located in Portsmouth:

The Duke of Buckingham, located in the centre of Old Portsmouth and surrounded by a wealth of seafaring history, is the top reviewed place to stay at. Their stylish accommodations with free parking service are ideal for a weekend getaway or even a longer visit. Besides Gunwharf Quay, they are just minutes from the beach and the lively dock.

This hotel offers luxury boutique rooms along Southsea seafront. It achieved the number two spot out of 41 hotels in Portsmouth with many  reviews highlighting their relaxing stay and facilities provided, such as 24 hours operating reception and cosy bar!

Top 10 Things to do in Portsmouth

Need a Locksmith in Portsmouth?

View our Keytek® Locksmiths Portsmouth to find your local Locksmith today or call us on 023 9387 6126! 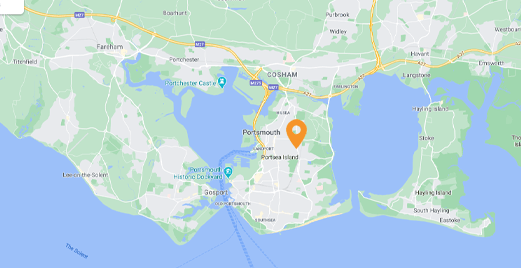